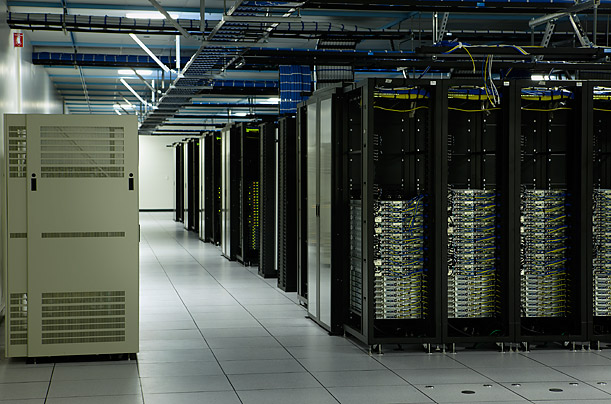 Pic from the Facebook Data Center. Jeff Rothschild, the vice president of technology at Facebook said “Today we have somewhere in the neighborhood of 70,000 servers,” during the Q&A session following his talk, adding that the number ”will be different today than it was yesterday” because Facebook is adding capacity on a daily basis.

That places Facebook among the largest Internet companies that have publicly discussed their server counts, but still well behind hosting providers Rackspace, 1&1 Internet and OVH, which each house more than 50,000 servers in their data centers.

It also suggests that Facebook has added about 20,000 servers since early 2008, which explains why it borrowed $100 million in May 2008 to fund server purchases.


The amount of log data amassed in Facebook’s operations is staggering. Rothschild said Facebook manages more than 25 terabytes of data per day in logging data, which he said was the equivalent of about 1,000 times the volume of mail delivered daily by the U.S. Postal Service.

Rothschild also discussed the effectiveness of the company’s engineering operations. Facebook currently has about 230 engineers on staff, who manage data for more than 300 million users. Rothschild said that having one engineer for more than 1 million active users has been a consistent historic ratio at Facebook. ”We believe engineers at Facebook have a dramatic impact.”


Who Has the Most Web Servers? 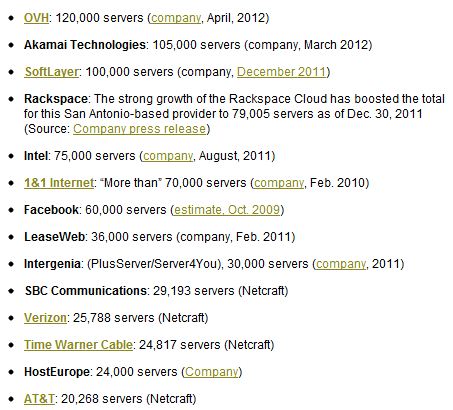 Popular posts from this blog

June 05, 2015
Hello Friends, Today we are going to learn how to hack VP-ASP cart of a Shopping website and download all their Database details like Customer details, Credit card details, Product details etc.

So some basic idea before starting the Tutorial,
What we are going to do here?
Firstly we will hack a shopadmin website then we will download the database file which will be in the form of *.mdb. This database file contains all the client details like credit card information and also login name and passwords.
How to do this ?
Note : This tutorial is tested on "VP-ASP Shopping Cart Version:5.00"
Step 1 : First thing to do is to find VP-ASP 5.00 Sites, to do this -> Go to Google.com -> Type "VP-ASP Shopping Cart 5.00"[ Without Quotes ] . See the image for reference

Step 2 :In this tutorial, we are going to target www.surfstats.com You can also select your website which is having "shopdisplaycategories.asp","shopadmin.asp" at the end of the URL. Since SU…
5 comments
CONTINUE READING »

How to make your SmartPhone work as Mouse and Keyboard

May 17, 2015
Hello friends, today we will learn how to make our Smartphone work as a Mouse and Keyboard remotely. We can also perform the below activities through this :

Okay so lets begin, for performing this you will require :

If you want to see what all things we can do remotely then check the Remotes tab.
Step 3 : Since now our Server is up we are ready to make a connection with the App. Download the "Unified Remote App" f…
Post a comment
CONTINUE READING »

February 19, 2015
Hi guyz, Today we r going to learn how to hack any Facebook or Email accounts using IP Tabnapping method. IP Tabnapping is similar to "Phishing technique" but here instead of using a web hosting site we will use own system IP address to get he email id and password. So for this you will require :
1. BackTrack OS ( We are using Backtrack5 R2 version, download it frm www.backtrack-linux.org)
2. Some social engineering tricks + Brain(most important thing)
okay so lets begin :
Step 1 : Open Backtrack, Click on Applications > BackTrack > Exploiting Tools > Social Engineering Tools > Social Engineering Toolkit > Set
Step 2 : Now u are in the set console, you can see several options there like Social Engineering attack, Fast track penetration testing etc. Just type 1 and press Enter . This will open "Social Engineering attack".
Step 3 : Now another window will appear Just type "2" i.e. Website Attack Vectors .
Step 4 : Now another window will appear, Ju…
3 comments
CONTINUE READING »

July 14, 2015
Today we are going to show you all a solution for the most common Error people face while performing Airmon-ng i.e. there will be no interface as shown below :

So how to fix this issue?

Step 1 : Before starting Make sure that you have Internet connection on your Backtrack or Kali Linux machine.If you are using  VM then make sure your VM network adapter is Bridged with the Physical Network.

Step 3 : After downloading we have to extract the file since its in compressed form(*.tar).so to extract it Go to the path where you have saved that file and then give the command :

Step 4 : After extracting go to that folder that is created after extraction, and give the command > make unload and then make load(for loading the new interface) and now you will be able to see the interf…
Post a comment
CONTINUE READING »

How to Bypass SMS Verification send by any email Provider

February 19, 2015
In most of the websites, it asks to enter your phone number for verification. Sometimes you don't want to give it because of your privacy reasons. Even when we register in websites like Gmail, Yahoo , hotmail, rediffmail etc. they asks for SMS Verification. So today we will learn how to bypass this SMS Verification method using external number.
For this method u can use the below mentioned website :
1. http://receive-sms-online.com/ 2. http://sms-verification.com
So how it works. This websites will provide you with some numbers . For example we are using http://receive-sms-online.com/ , In the below image u can see it is providing with some numbers. we will use this number to verify our account.


Now give any of this number where it asking for number and for the verification click on the Number u gave, and refresh the page. You will get your code as shown on the image below :
For any clarification do comment below.
CREDITS :- Amar Helloween & KIIT Hackers Team